The Steam-Away is a sap pre-heating and evaporation system that can be added to any flue pan or steam pan to increase evaporation rates.

Intense testing was done and has shown a 65-75 percent increase in evaporation rates after installation of a Steam-Away. The Steam-Away is patented and proven to work effectively for all size syrup producers, including this Wisconsin Syrup Producer:

"The best recovery for money invested. I had a 75% increase in production. I'm very happy and very impressed."

As an added benefit, the Steam-Away provides a constant supply of 200º hot water for the sugar house. Now made entirely of 304 Stainless Steel. And of course Made in the USA.

How does a Steam-Away work?

A series of small steam pipes are submersed into shallow, V-shaped trays filled with cold raw sap. As the steam from the flue pan is released it hits the bottom of the V trays and is then funneled through the steam pipes before it can escape. This incredible ratio of heating surface to volume of sap allows virtually all of the steam to be used, and then it cools and condenses back to water.

Now the finishing touch to make the system ultra-efficient: High pressure air is added through two small pipes at the bottom of each V-shaped tray to agitate the sap, making it appear as though it were boiling. This process of introducing oxygen into the system allows vapor to be released without actually reaching the boiling point, and even further decreases the volume of liquid within the Steam-Away.

A float on the Steam-Away maintains a consistent liquid level within the unit, so that the steam pipes stay submersed and the liquid exits to the flue pan as needed by the flue pan float, so no additional sap is needed for the evaporator.

The end result is 190-200º sap that has been slightly concentrated before it even enters the flue pan. All of the condensation from the used steam is collected and a constant supply of 200º hot water exits off the rear corner of the Steam-Away. There will be 3/4 to 1 gallon of hot condensate water created for every gallon the evaporation rate increases. 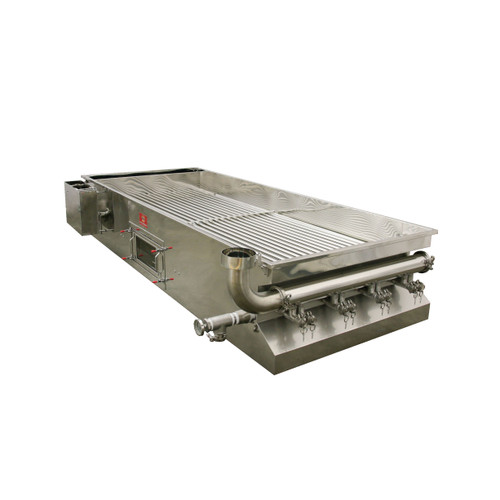