This 7/16" plastic spout is shortened for use with spout adapters and the new check valve adapter, creating a two-piece spout system.
The two-piece spout systems offers a better system for tapping, limiting the effects of bacteria in the tap hole. Ultimately, bacteria will seal the tap hole to end the season earlier than it otherwise should. With a two-piece spout system, the tip of the spout that goes in the tree can be changed out for a new bacteria free tip each year.
What is more, by using the new check valve adapter with the stubby spout, production can be maximized, because sap that has reached the bacteria filled drop line and permanent stubby spout will not flow back into the tap hole to infect the hole and start the closure process prematurely.
The stubby spout also helps to limit the distance that the spout and drop line stick out away from tree, so that falling tree limbs and ice are less likely to do damage to the tubing, or pull the spout out of the tree. The Stubby Spout is installed into the adapter by pushing it into the cup on the adapter as you turn the fitting a quarter twist. A very light wrist tap with a hammer is sometimes (though rarely) needed to finish seating the stubby spout into the adapter if a leak shows during the season. 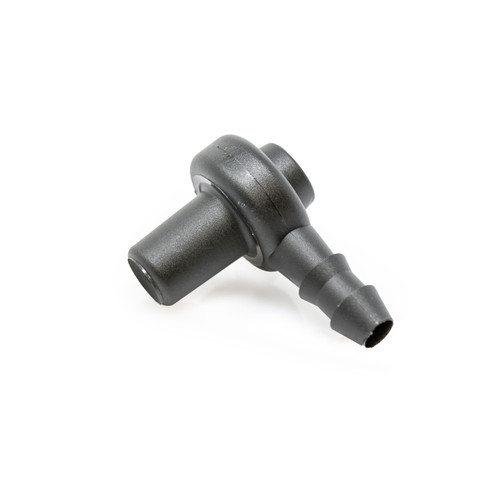