This plastic spout adapter converts a 7/16" tubing spout to a 5/16" tubing spout by installing a new tip onto the existing stubby or standard 7/16" spout.
The adapter allows one to replace the tip each year, which will limit the effects of bacteria in the tap hole.
Bacteria is what ultimately closes tap holes, and old tubing or fittings can become infected, shortening the season. A new tip can help to limit the immediate infection, so that the season is prolonged and production is increased. A new tip in the hole will also reduce leaks at the tap hole, because the new tip is still perfectly round, whereas older spouts can go slightly out of round over time, creating a leak.
The adapter is made to be tapped into the tree using light wrist taps from a hammer. The hole in the maple tree should be 5/16" in diameter and drilled approximately 1-1/2" deep. The plastic spout adapter only goes 3/8"-5/8" into the tree. Once the spout adapter is installed, the 7/16" spout or stubby spout should be pushed into the cup on the adapter with a quarter twist. A light wrist tap may be needed from a hammer if the adapter leaks during use. Do not drive the adapter farther into the tree, as it may cause the tree to split, which creates a leak and increases the damage done to the tree. 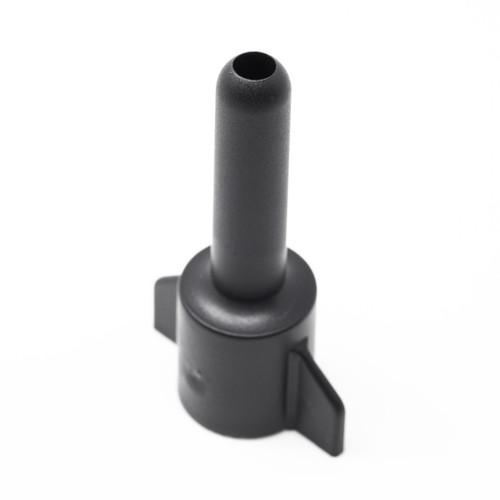